THE WORD THAT TRANSFORMS

Since its origins, the Divine Word Missionaries, inspired by its founder, Saint Arnold Janssen, has been committed to the Biblical Apostolate.

The The Grupo Editorial Verbo Divino (GEVD – Divine Word Publishing Group) is a platform for the work and interchange of experiences between institutions that is dedicated to the publishing, production and spreading of like-minded books, publications and materials as well as collaborating towards the integral training of all persons from the charisma of the Divine Word Missionaries. We aim to provide the space for reflexion, planning and assessment of the actions of the Biblical Apostolate that each member in their country and the Group as a whole fulfil. This labour not only helps to spread the cause of the mission, but is mission in itself.

The GEVD is an evangelizing presence in a world of rapid changes. In the midst of the avalanche of information we receive every day, we wish to testify to Jesus Christ as the Word that creates community and builds communion, and offer it to the world as a source of dialogue, of communion, of peace and harmony.

All GEVD work is developed according to the following editorial lines:

Transmitting the Gospel
Since 1999

The group’s activity begins to take shape in 1999 with the celebration of the II Encounter of the GEVD, which takes place in Estella between the 1 and the 8 October, prior to the International Book Fair LIBER set to take place in Madrid. At this second meeting, the encounter is enriched by the attendance of the Centro de Difusión de la Biblia (Paraguay), Librerías Verbum (Mexico) y Empresa Periodística Mundo (Chile).
Between the years 2000 and 2003, GEVD activity is consolidated with the celebration of the annual encounters in Buenos Aires (2000), Estella (2001), Mexico City (2002) and again in Estella (2003).

In the year 2000 the GEVD constituents embark upon a highly-significant common editorial project: the publication of the Comentario Bíblico Latinoamericano led by Armando J. Levoratti.Furthermore, the GEVD go public with their participation at the World Congress of Publishers Buenos Aires, 2000), LIBER (Madrid, 2001 and 2003) and FIL (Guadalajara, 2002).In 2003, the greater GEVD family welcomes with satisfaction the arrival of a new member: the Ministerio Bíblico Verbo Divino (U.S.A.).

Over these years, the celebration of the annual encounters in Estella is confirmed, prior to participation in LIBER.

In 2005, the presence of GEVD in Estella leads to the start of acts of celebration in aid of the 50th anniversary of Editorial Verbo Divino in Spain, and commemorations reach GEVD itself in 2009 with the celebration of the 10th anniversary of the birth of GEVD itself.Moreover, further arrivals renew the initial stock: in 2010 the Librería Verbo Divino (Costa Rica) becomes the latest addition.

However, GEVD does not only grow on the inside, but it also opens up outwardly in 2013 as it joins the International Biblical Federation as an associate member.
The annual encounters celebrated in Estella are the scene of new additions that strengthen the GEVD and consolidate their universal missionary vocation, with the arrival in 2015 of Verbum Bible (Democratic Republic of the Congo) and in 2017 of Librería Verbo Divino (Panamá).In 2016, GEVD consolidates its affiliation to the FEBIC, joining the Latin American and Caribbean zones. 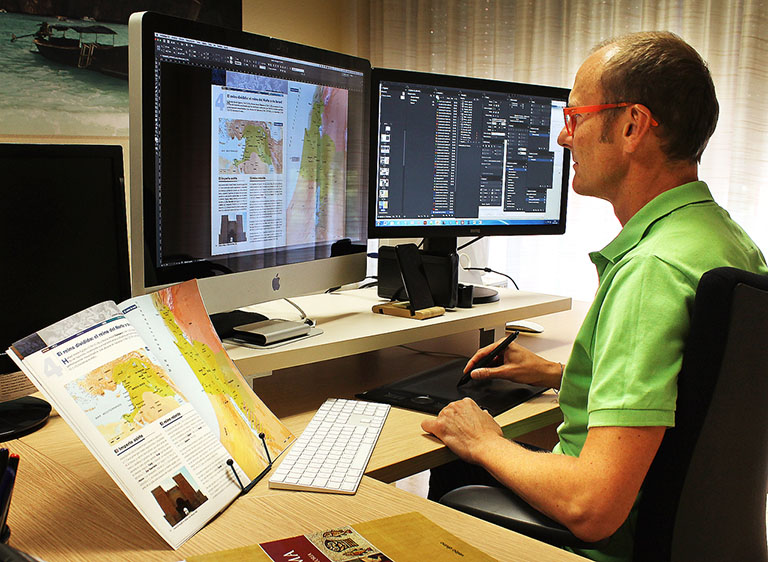 With our Heart
in The Word

Convinced that the Word of God has something to contribute to the human being at all times and in all circumstances of our lives, we centre our endeavours on the wholehearted announcement of the Good News from a triple focal point:

Biblical Encouragement of the Pastoral

OUR PRESENCE IN THE WORLD

September month of the Bible

Throughout the last decade, from EVD we have been encouraging September to be celebrated as the "Month of the Bible", in memory of the first impression of a Bible in Spanish on September 26, 1569. The intention is that during this month we can share the development of some activities that allow the approach to the Bible so that its message is better known and becomes the backbone of all the pastoral activity of the communities.

This year we want the reflections of the celebration of September, month of the Bible to be cause for hope in this context of pandemic and global crisis, marked by uncertainty........... (See more)